There is an ever-increasing voice from consumers who are striving for more sustainability. More and more entrepreneurs are realising the importance of purposeful entrepreneurship, which involves so much more than making profit. Purposeful entrepreneurship means defining a clear brand purpose where profit is subordinate to - or a side effect of - a brand strategy that primarily aims to have a positive effect on people, society and the planet. The focus for many companies lies more often on the 'purpose', and that for all parties involved with the brand.

Brand purpose can be specified as the value that an organisation or company creates for others, the society, the planet or the common good. The 'purpose' gives meaning to a company, its services or products and has a great connecting power. It gives a direction to your brand and serves as a filter to determine what your brand should or should not do. So it can contribute positively on several levels. For example, the share price of 'purpose'-driven companies also turns out to be significantly more favourable than those of counterpart companies without a clear central purpose.

Let's make it a bit more specific. What are the characteristics of a good brand purpose?

The importance of a brand purpose

With a clear brand purpose, you say much more clearly who you are and what you stand for as a company. And this has a great effect both internally and externally.

Internally, a clear purpose increases employee commitment because they can unite behind a common goal. In this way, employee satisfaction is also increased. It is the driving force behind the reason why people start working at a company and why they stay. For example, 60% of millennials say they want to work for companies that have embedded their purpose in their business strategy.

Purpose also works in the context of customer relations: 73% of consumers are likely to buy brands that place purpose above profit. Consumers increasingly want to be part of a stated purpose when it is meaningful to society, the planet and its resources. The concept of sustainability is therefore gaining traction with consumers. 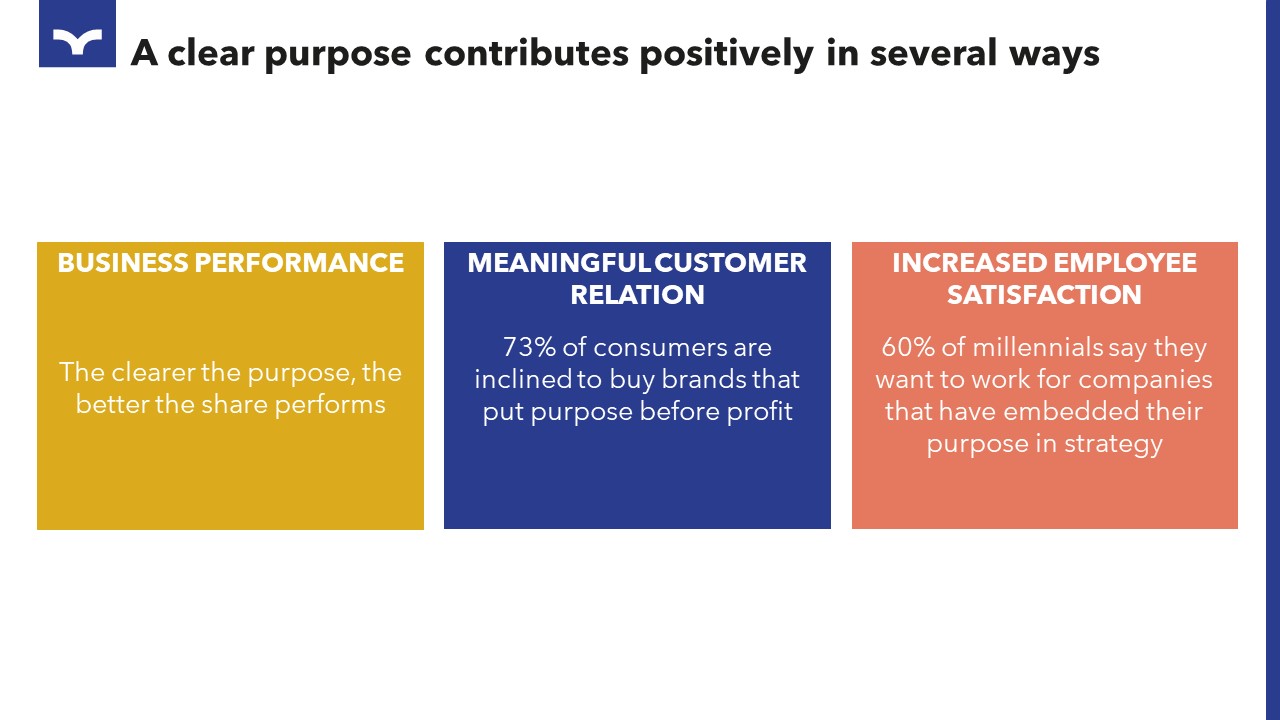 If you position profit and non-profit organisations up against each other, you will see a number of dominant beliefs that are driven from the bottom up, such as the human image and specific values and principles that are applied. Profit and non-profit are completely different systems or moral frameworks that set boundaries.

Profit is about maximising shareholder value. Success is measured exclusively in terms of monetary performance such as turnover, market share, margin, growth etc. If profit organisations determine a mission, objectives or purpose at all, it is from an opportunistic point of view rather than from a well lived strategy.

A non-profit organisation has a social mission, which stems from a dignified existence for all, the common good, with special attention to the weak in society. It benefits from a strong government and lives on gifts, donations and funding. Any money it generates is reinvested in the organisation's operations.

We are witnessing an increasing tendency away from the traditional division between profit and non-profit. There is a real midfield of companies that operate with a clear purpose and sustainability promise. Not only do they have a clear purpose, they also actively strive to create a better world, economically, ecologically and socially. And here, too, there are still different types of play. For example, some organisations still put profit first, while for other companies profit is not an ultimate goal, but rather crucial for their operations, innovations and people. 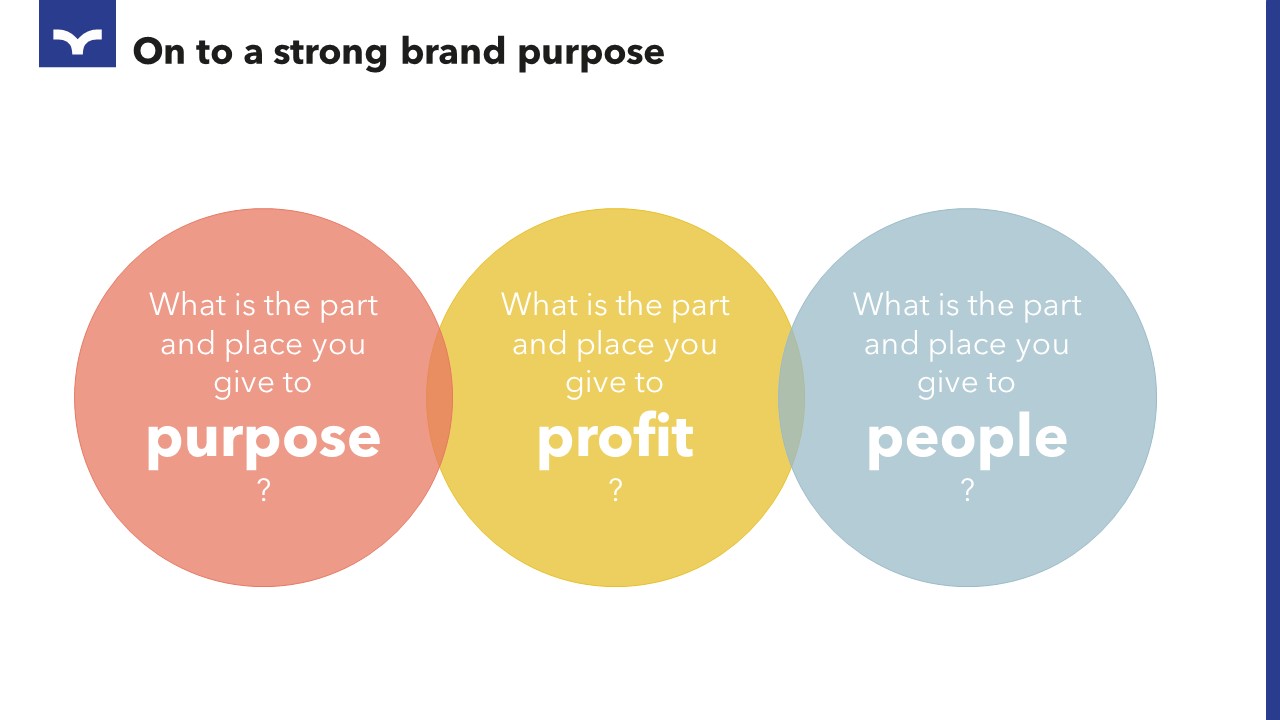 A strong brand purpose is more than nice words

The most important thing is that the total ecosystem of your company is completely infused with the purpose, but it doesn't stop with the words. For example, a strong purpose can be very persuasive and even dazzle people, but the actions that are actually taken have more influence than the hollow words you utter. If you don't actually carry out the stated actions, you will burn your head.

A striking example of this can be found in the story of Theranos. At the age of 19, Elizabeth Holmes started this tech company as a school leaver. With Theranos, she wanted to cause a revolution in consumer-healthcare technology. Their purpose? "A world in which no one ever has to say goodbye too soon." It would make the future of lab tests and health information affordable and accessible. Holmes surrounded herself with powerful entrepreneurs and decision makers, and invested in sophisticated marketing campaigns. In no time, the company was worth 9 billion dollars. There was only one problem: the promised technology did not work. For ten years, Theranos managed to keep this scrupulously hidden, but then the bubble burst. Meanwhile, the company has been shut down, Holmes has been found guilty of fraud and she is facing a long prison sentence.

This is an extreme example, obviously, but unfortunately a lot of companies engage in purpose washing. This is when brands fail to deliver on their social promises. It means there is a big gap between what brands proclaim in very creative campaigns and their daily practice. They mislead or present themselves as a brand that is environmentally aware or wants to do good for people and society in some other way, but in fact this is not the case.

Whereas greenwashing is done unconsciously and is the result of a lack of knowledge about sustainability, purpose washing is something that is very deliberately planned in the context of marketing and public relations. It has misled willing consumers in the past, leading to a healthy scepticism about actions that companies - with their best intentions - take to improve the environment. Brands that commit to 'purpose marketing' must put their money where their mouth is. Otherwise, inconsistency and, even worse, lack of credibility are the result.

Sustainability is no longer just about the actions we take to help our planet. With a good brand purpose, your own company will also become sustainable. By framing a strong brand purpose and living and working according to it, an organisation or brand will be in a much stronger position. Now and in the future. Meaningful entrepreneurship will therefore have a solid meaning from now on.

Want to know how to sharpen your positioning, mission and brand purpose?
And how to stay ahead of your competitors?

Get tips & tricks in our free webinar 'The importance of a brand purpose' on the 21th of April.