From unspoken idea to finished product

From concept development, via the perception of the product, to its final delivery to the shop shelves

It has been hard to avoid recently: the launch of Alken Maes' new lager, Cristal XTRA. We were allowed to participate in the development of this product from the very beginning. From concept development, via the perception of the product, to its final delivery to the shop shelves. The latter was preceded by a whole process and we are pleased to take you through the most important steps of this strategic development.

Alken Maes is known for brewing 14 types of beers and ciders. One of them is Cristal, which recently innovated within the lager segment by launching Cristal XTRA. With this lager, Alken Maes wants to better answer consumer needs regarding a pils beer in terms of taste discovery and experience. In this project, all stakeholders were constantly involved from rough idea to finished product. In that regard, it is a textbook example of an efficient innovation process whereby, starting from the unspoken needs of the consumer, a new product can be launched in just a few months' time. Take a look at the creation of Cristal XTRA.

From needs to concepts

Starting point of the research: what exactly are consumers looking for? To gain insight into the needs and desires of lager, we talked to them - the consumers, the ones it's all about - to discover what tastes and experiences they find important in a lager, and what ideas might satisfy their unspoken desires. Through a digital platform, we interacted with consumers and they gave us an insight into their lives over several days.

Not only (potential) consumers were included in this process. No less important were Cristal's ambassadors, namely the pub owners, bartenders and distributors of the beer. Since they are in daily contact with these kinds of products and with the consumers, they have a good idea of what is going on. So we went to them to develop and discuss ideas together. And of course, workshops and brainstorm sessions with Alken Maes' stakeholders were an important part of the strategic development too.

From the many ideas, two concepts emerged that clearly addressed the detected consumer needs. A quantitative study then had to determine which product concept had the greatest potential and which claims had the greatest impact. The internal teams of Alken Maes, such as marketing and R&D, were also closely involved in this, so they could immediately start working with the results of the study. They constantly integrated the input of consumers, stakeholders and ambassadors in order to experiment with flavours and design.

In this continuous development process, prototypes were made and remade, tested and retested. By involving all stakeholders in the research loops, recommendations were immediately implemented and reworked prototypes could be fine-tuned for immediate retesting in a competitive market context.

At a parallel stage, pack designs were created that were equally subjected to scientific and consumer research. It was crucial that the new designs were in line with Cristal's new visual identity but also reflected the unique and premium character of Cristal XTRA. In order to find out which of the packaging proposals was most in line with the premium cues of the beer, a Vickrey auction was organised. At the same time, we conducted an in-depth colour audit including predictive intelligence measurements. With the recommendations from these studies, the design agency was able to finalise the designs.

Finally, a last study determined the optimal price points and packaging formats. Thanks to everyone's close involvement, the final Cristal XTRA beer was developed, from product to packaging design, formats and price points. From there, Alken Maes developed a complete campaign, which was used for the launch of the final product. 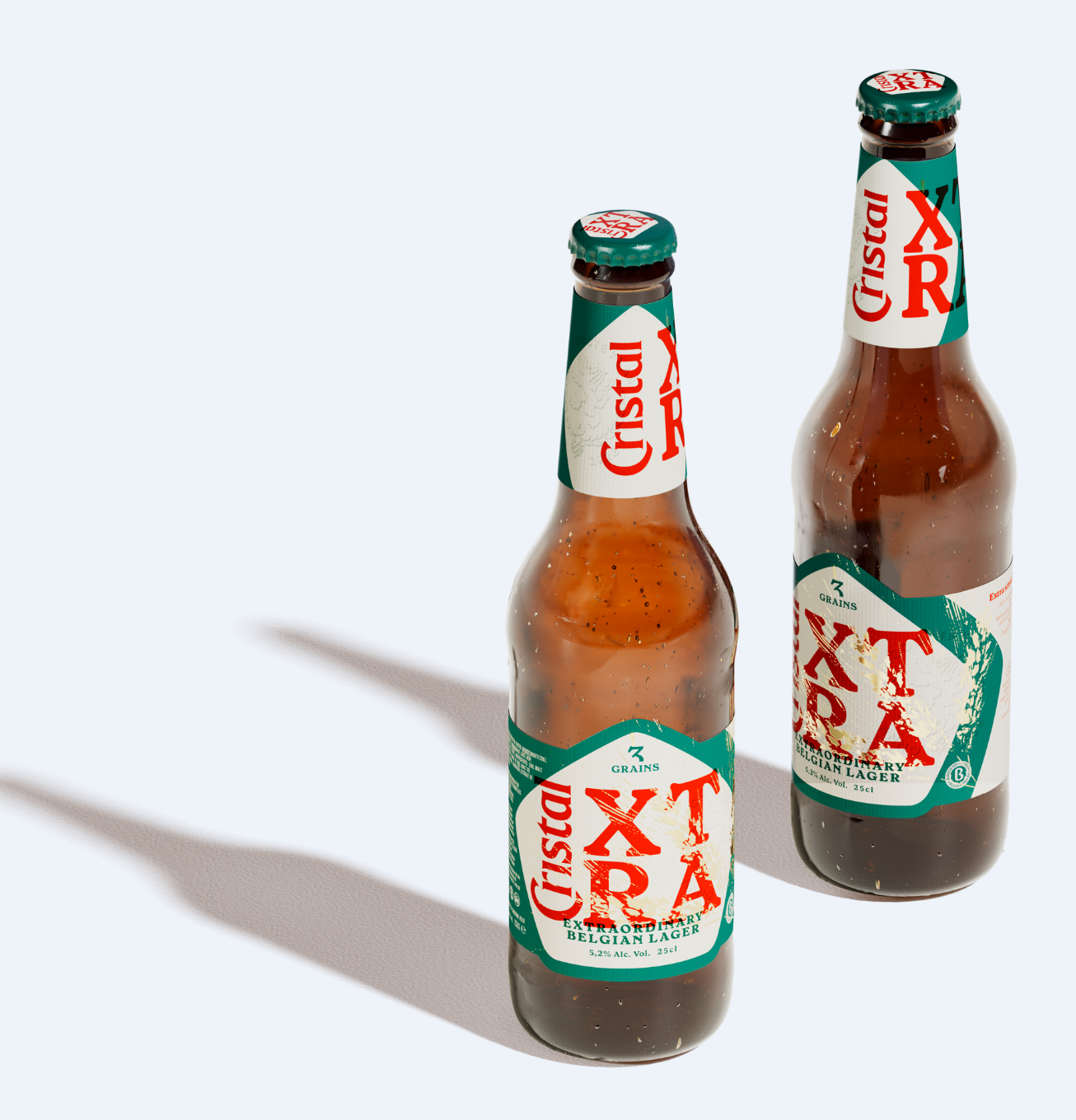 In this complete design thinking process, a lot of iterative methods were used. The development phase became a succession of loops, which made it possible to return to a certain switching point each time and to restructure on the basis of the feedback obtained. By handling the data obtained in the different phases in an agile way, it was possible to react quickly and adjust where necessary. The realisation of an end product is a simultaneous process that requires all parties involved to be constantly in the loop. While going through all the research phases, whether it concerns beer or any other product, the consumer must always be central. By developing products based on the wishes of the consumer - and, moreover, by researching and testing this - everyone benefits.

Are you interested to know more about this case study? Are you curious how One Inch Whale can help you design your new product from A to Z? Feel free to contact us for an exploratory meeting.

And in the meantime, enjoy a Cristal XTRA at your home or on a terrace or check https://www.alken-maes.be/ for more info.